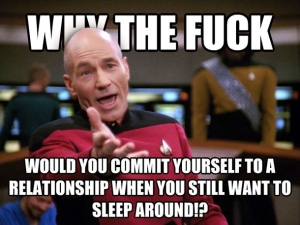 You know those relationships that are going nowhere, but one partner doesn’t know that. When one-half of that relationship is actively looking for another boyfriend/girlfriend, even to the point of going on dates and or worse yet, having other side relationships. I know too many situations like this and it makes me sick.

Now I know how this kind of situation often evolves. We want sex, intimacy and all the things that come with that, so we meet someone and things go great for a while. Then suddenly we find ourselves in a relationship that we weren’t looking for or that we really don’t want. But the regular sex and other perks has a way of keeping us in said relationship.

The sad truth is that most of know early on if someone is a potential life partner. We know if we can build something lasting with the other person and we know when the relationship just won’t last. Then the real question is, why stay in the relationship? Why settle for Mr/Ms Right Now and turn them into relationship placeholders.

We know the break-up is coming so why not make a clean-cut before it gets too painful?

Instead, we string the other person along until we find a better alternative. Additionally, I have found in my experiences that it is men or older women who have relationship placeholders. Some poor deluded partner thinking that they had found something real only to suddenly feel the rug pulled when the break-up comes.

I’m beginning to believe that this is the ultimate form of selfishness, yet I cannot seem to convince my friends of this.

I am tired of my friends complaining about their partners and even coming to the realisation that they are heading for a break-up, yet continue to drag the dying relationship to the bitter end – while seeking replacements. That’s the part that really gets me.

It’s one thing to try to work on your relationship, to see if it can be mended before the big break-up; but if you are already looking for a replacement while keeping the placeholder then that is so wrong. I believe the moment that your eye starts to wonder and you sign up on a dating site then your relationship is officially over. You have just done the egregious thing of not telling your partner.

The most prevalent excuse is “my partner and I are having problems so I’m just checking out my options” – then checking out the options becomes cheating. In fact, I have a friend that has an official girlfriend. He and her had a big fight months ago and since then he’s signed up on dating sites, taken a bunch of girls out and actually now has multiple side relationships. Yet, he continues to maintain his official relationship even though he knows he doesn’t want to spend the rest of his life with her. She’s a placeholder while he plays the field.

She thinks they are building something while he’s just biding his time until he gets rid of her. He doesn’t really care if she finds out he is cheating because then she will break up with him and he prefers it that way. He will only break-up with her when he is sure he has found Ms Right. Now how do I convince my friend that that is just wrong?

Welcome to my self-indulgent, whiny rambling blog. Where I explore lifestyle topics, food stories with recipes, sex and dating dilemmas - you know the juicy stuff. READ AT YOUR OWN RISK. *Title translation from Jamaican Patois - "Here is my face".

But I Smile Anyway...

Musings and memories, words and wisdom... of a working family woman

Multi-Genre Author of YA Fantasy and Non-Fiction Self-Help

Where Sarcasm Gets Drunk and Let's Its Hair Down

I write a lot. And I write about writing a lot. Come here for lifestyle, fiction, and who knows what else.

The Boys I Encounter
the Confessions of a Wanderer

constantly searching for my next adventure

The blog where you learn, laugh and get inspired

A blog full of tips, inspiration and freebies!

A Journey of Self Awareness